There’s been some Lollapalooza editions in Brazil that I wish I had been. There’s always a band or someone that I’m interested but the price of the tickets is always disappointing. Especially if you don’t live in São Paulo, where the shows happen.
In 2013, I wanted to go for Cake. I’m not sure if it’s my favorite band of all times, but it’s the band I know most songs by heart. And I mean like almost every song they’ve made. In 2014, it was Muse, but this lost was compensated in Rock in Rio later on. 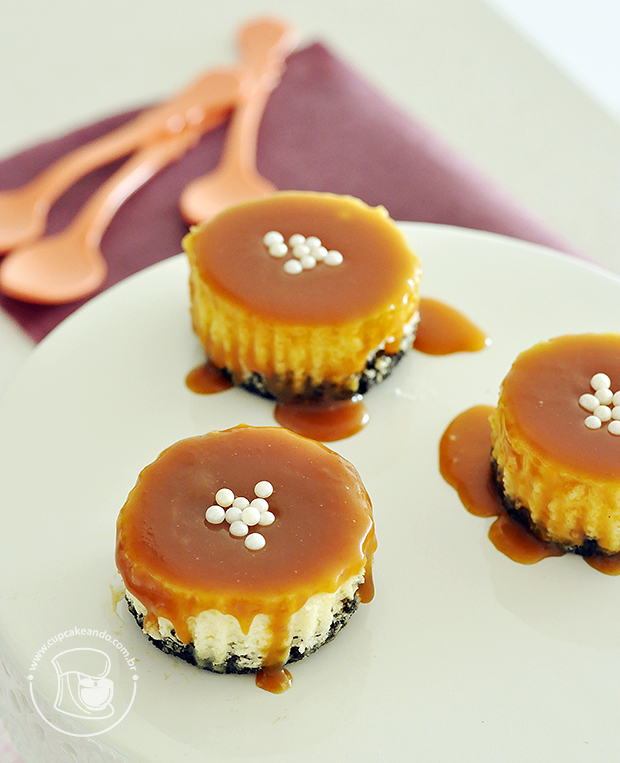 In 2015, there was Jack White and I was so sad staying home while I saw his incredible show on Youtube. This guy rocks, really. He’s like Midas or something: everything he touches is good. His last solo CD is amazing and he’s also the founder of one of my favorite bands: The Raconteurs. I actually know every single and song they ever played.
And for 2016 I was kinda settled already of not even thinking about going, since money is a bit distant from me these days. When the lineup was announced, I check just to torture myself because I knew I couldn’t go. “Eminem”, it said, and I though ok, I knew I would lose something big again. But it was when I read the smaller names, the ones the production thinks as “less important” by some weird logic, there I saw it: WALK THE MOON. 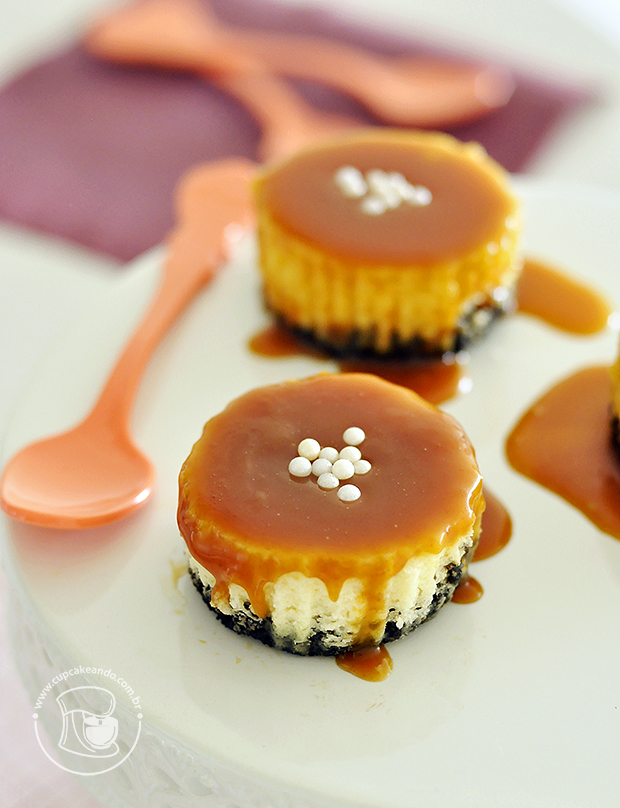 I flipped. OMG! WALK THE MOON has been my most played band for at least 5 months now, their songs are in eternal loop on my car’s playlist and I sing them out loud almost everyday. A bit obsessive to say the least.
My sadness for not going was as huge as in 2013, with Cake. And Eminem, god! Slim Shady! Guys, I like him. He’s like Marilyn Manson: sings some bullshit but it’s a nice guy in the end of the day.
Me, Mr. Boyfriend and my friends went crazy with the perspective of seeing Eminem, but I was on the hype just for the laughs. I knew I couldn’t go. 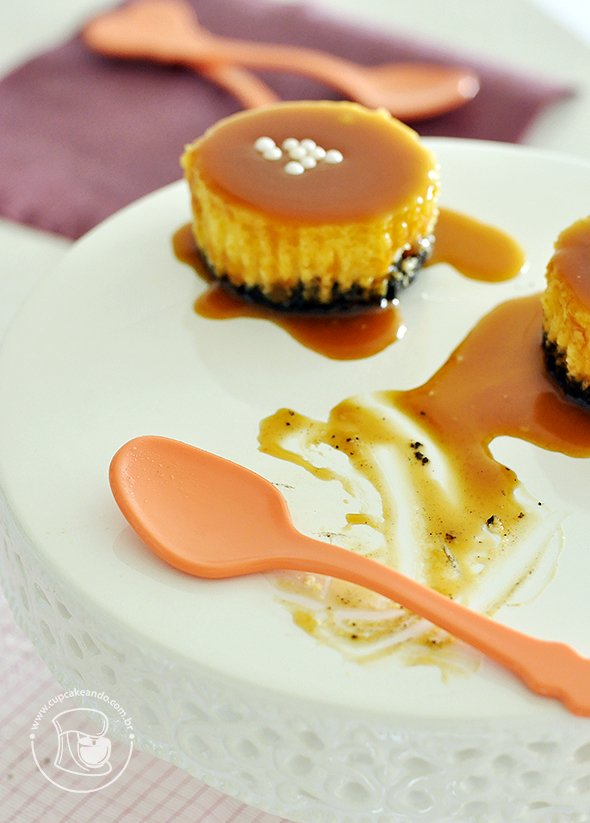 But you see, this is what life is about: you surround yourself with good people and good things will happen to you. And it’s through their love and caring that they decided to team up with Mr. Boyfriend and take me to São Paulo for this Lollapalooza. Everybody together! To se Eminem and WALK THE MOON!
Yeah, so just so you all know: I LOVE YOU GUYS LIKE CRAZY. And São Paulo, see how you just get better as the days go by? Thank you!

1 – Process the cookies until you get something close to very fine crumbs. Add the melted butter little by little until you get a sand like texture. You may not need all the butter, it really depends on the brand of cookies you use, so be careful not to overdo the butter.
2 – Divide the crumbs amongst the paper liners, already inside the cupcake pan. Press the bottoms to form a sort of floor. Use the back of a spoon to press down or the back of a glass cup. Keep it on the fridge while you make the filling.
3 – Beat the creamcheese for 3 minutes until it gets very light and fluffy. Then add the refined sugar spoon by spoon, slowly.
4 – Add the eggs and beat to incorporate. Add the vanilla and beat again. The mixture will be very liquid, that’s normal. Divide among the paper liners, filling 3/4 full each: the batter will insufflate in the oven because of the eggs but then it will settle later, so you can almost fill it all but leave some space for the caramel afterwards.
5 – Bake them in a pre-heated oven at 135˚C for 40 minutes, or until the are firm in the center but before they start to brown. When ready, remove from the oven and allow them to cool slightly, then place the pan in the fridge for at least 2 hours to settle.
6 – Prepare the caramel: bring the sugar and water to a boil in a heavy duty saucepan. Brush the sides of the pan to ensure no sugar crystals are there.
7 – Wait until the syrup gets to a brownish color and do not stir with a spoon. If you want to handle the mixture, tilt the pan CAREFULLY, swirling the syrup. As you start to smell a bit of burnt sugar, the thermometer should mark 180˚C.
8 – Add the heavy cream all at once and quickly stir with a spatula to melt everything together. At first it won’t look like it will come together, but trust me it will. Just be careful with the hot pan. Turn off the heat and keep stirring. The bubbles will dissipate and you’ll have a perfect caramel. Transfer to a small bowl and let it cool down before placing one or two tablespoons over each cheesecupcake. Keep them on the fridge until time to serve!

I think I’ve said this before but I will say it again: we can call what we create whatever we like. And that’s why I named these cuties cheesecupcakes, which will be the standard name for every cheesecakes in cupcake style. 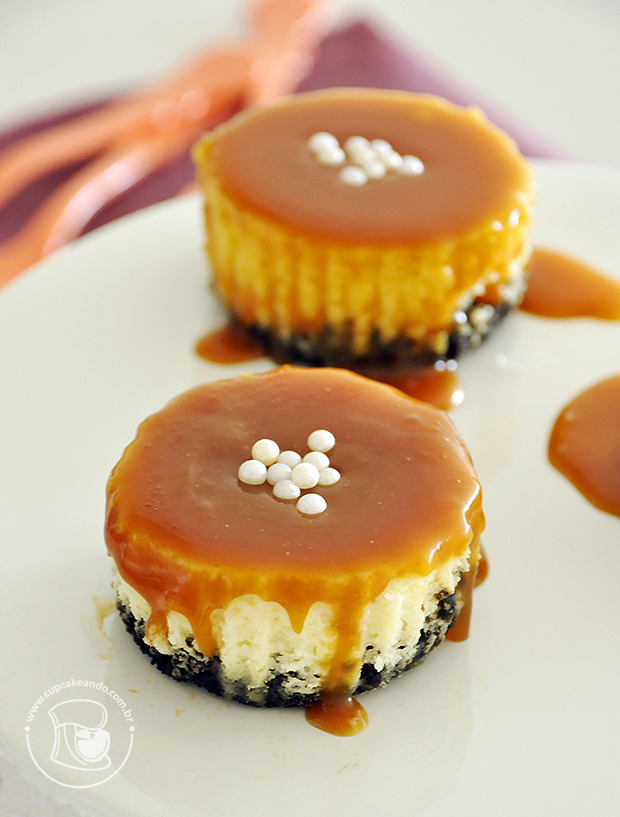 It’s incredibly yummy: the caramel gets very very delicate and tasty, and it matches the cheesecake perfectly. You should serve them on a plate and the person can remove the paper liner so the sauce will drip down on its own. I bet you will enjoy it!

What do you think about my global theory: surround yourself with good people and good things will happen to you? Does it work for you?