Cooking is trial and error. Sometimes I tell you guys that in the comments when I’m not able to answer a question. Thing is most of what I know about cupcakes or even patisserie is based on many days spent inside a kitchen, testing recipes and recipes, one after another. That brought a lot of flour on the floor, ants everywhere, buttercream clogging the sink, batter spilling on the workbench, chocolate on my cheeks (how did it get there?) and colored fingers from food colorings. Once, I managed to explode – yes, explode – a glass bowl belonged to my grandmother, and up went the chocolate. My luck was that I had just left to get a spatula, otherwise a shard might have hit my eye.
So, when I read somebody’s comment asking “will it work if I substitute this for that?” or “can I add whatever to the recipe?”, my go-to answer is always “just go with it”. Seriously! The worst that can happen is that it won’t work and you will have lost a couple of ingredients. But it can also work awesomely nice, right? 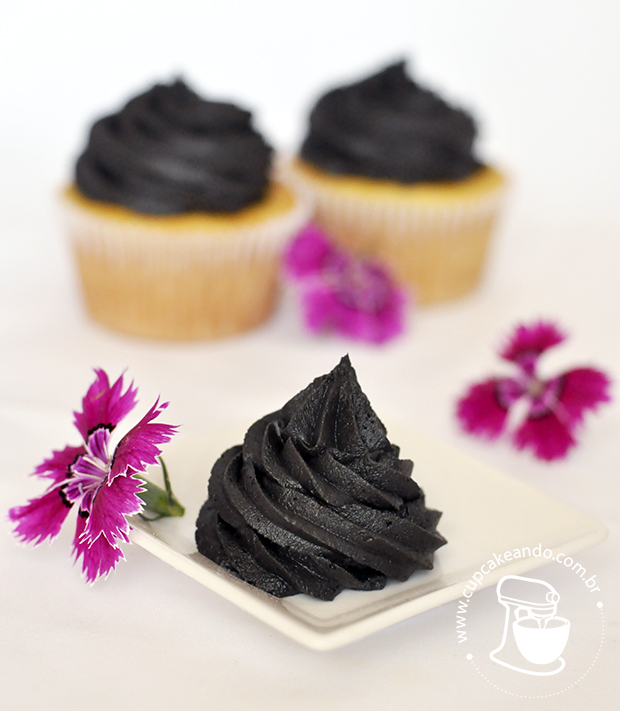 Of course I don’t recommend the “just go with it” if you are preparing an order for a client or for a special party. The “just go with it” fits for a simple cupcake making for your family. After testing and making sure it will work, you can surely use the idea in orders and other important dates.
This frosting was discovered in a testing day, just like many others. I needed a frosting that would be completely black so I could draw Jack’s faces on top of the cupcakes, for a birthday party of a friend who loves him. I tested two or three recipes before achieving this shade of black. It’s not 100% black, but I believe it’s like 89% black, which is already a lot! And the best part: it has nutella, which makes it even tastier! Nonetheless, the amount of food coloring is a lot so I don’t recommend using it as a single frosting for a cupcake. But if you do, just eat one!

1 – In the bowl of your mixer, beat the butter until it’s fluffy. It should be room temperature! Add nutella and beat until it’s fully incorporated.
2 – Add the sugar and beat again, until it’s incorporated. Start at slow speed or the sugar will splash over your kitchen, like it happened to me…
3 – Add the milk and the food coloring and beat until it’s uniform. If you think it needs more color, add 1/2 teaspoon at a time, but remember that after a certain point adding more food coloring does nothing to it, no matter how much you use. If you want the frosting to be firmer, add more sugar. Be careful not to get it too sweet! 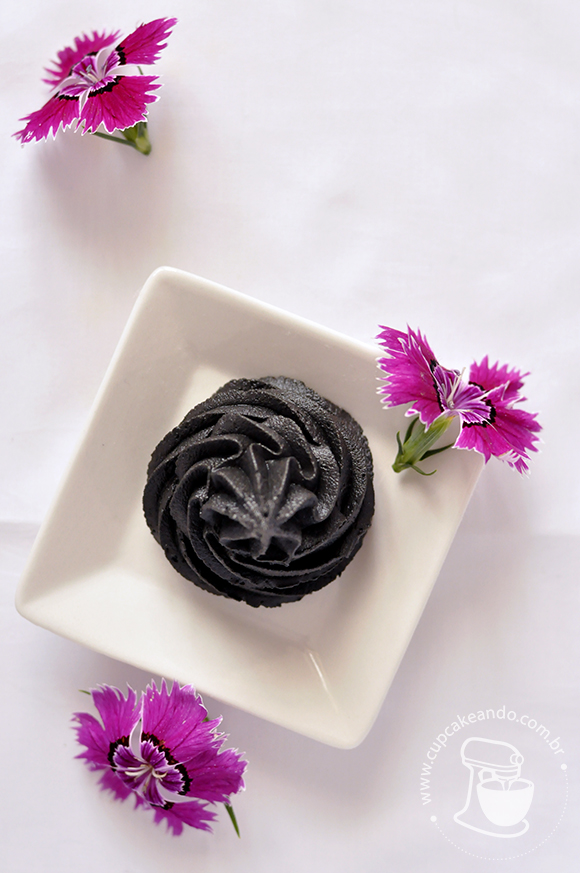 It holds the shape very well, but I prefer this frosting as a detail on top of another frosting, like a flower or something like that. It will look delicate and cute!

How about you and your kitchen adventures? Ever had one? Share a piece!