My kitchen is almost ready! (fireworks go off now!)
After a anxious delay, the cabinets start to get arranged this week. I still need to get the kitchen appliance, the bed, the so many boxes filled with kitchen stuff, my utensils, my books, everything down there. Now it is time for a swirl of stuffs to manage, arrange and settle, because it’s the last details and as such we want to get it over with fast.
Speaking of which, I need to explain myself on why there haven’t been anymore videos for you guys. Recording the videos where I currently live is very complicated, for a series of reasons. Firstly, I live in a house with other people, who too need to eat, and when I recorded those two videos you’ve seen, I practically blocked the entire kitchen for a whole day. Besides, the kitchen in my parents house has very poor light, and that makes the videos quality drop considerably. 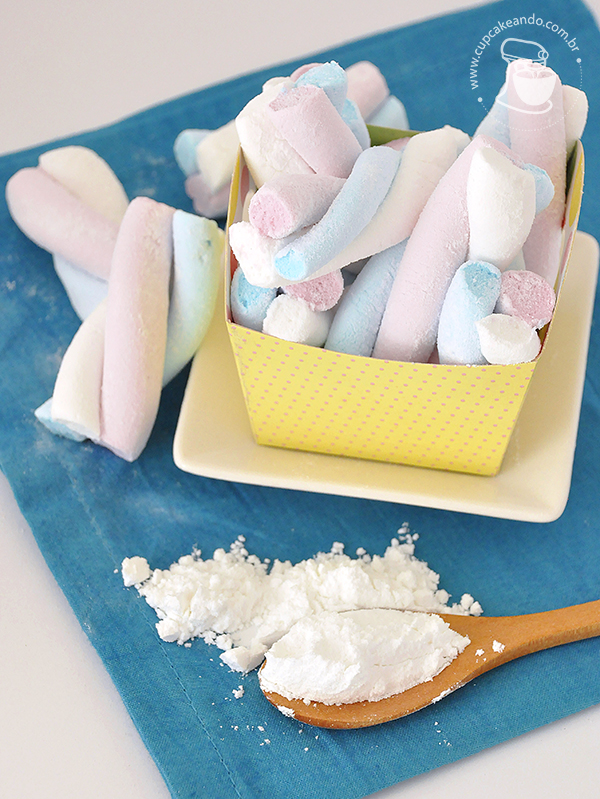 In the end, I was waiting for the apartment kitchen – which I will call from this moment on Branquinha, something like Whitey in Portuguese – to be finished so I could record more videos for you guys. Since it was delayed, the whole agenda was delayed as well.
But do not fear, my fellow mates. Soon I’ll be with Branquinha, a beautiful, amazingly cute kitchen ready to make some cool stuffs.

Everything more complicated than buying readymade is a nice idea for me, and a complete despair for Mr. Boyfriend. So homemade marshmallows seemed like a great idea. Be warned: this is not an easy recipe, or a quick one. But it’s a nice project for a whole day in the kitchen. The original recipe calls for making three of this and coloring each in one desired color, but I decided to get a bit courageous and made everything in just one batch. Feel free to follow the original if you want to eat marshmallows for months.

Homemade: Marshmallow ropes
Yields: about 30, if cut just like the photos
Recipe by Sprinkle Bakes.

1 – In a big bowl, sift together the icing sugar and the cornstarch at least three times. Arrange pieces of parchment paper on a big table and dust with the sugar mixture generously. Save some for later.
2 – Mix the gelatin with the cold water and leave until it blooms. In a small saucepan, add the sugar, 1/4 cup of the glucose or syrup, the salt and 1/4 cup of water. Turn on the heat and let it come to a boil.
3 – Meanwhile, add in your electric mixer bowl the remaining glucose/syrup. Melt the gelatin on 10 seconds bursts in the microwave just until it’s liquid and then pour in the bowl as well. Turn it on mixing speed until the sugar syrup reaches temperature.
4 – When the syrup reaches 240˚F, slowly and carefully pour the syrup in the mixing bowl while it’s mixing. Turn the speed to medium and beat for 3 minutes. Then turn it up to medium-high and beat for another 3 minutes. At last, crank it up to the highest speed and leave it beating for another 2 minutes. The mixture should double its volume and get an opaque shine.
5 – Add the vanilla and incorporate beating some more. If you want to make a simple marshmallow, you can simply pour this mixture into a oil-greased pan with parchment paper and leave it to set, dusting with the icing sugar mixture.
6 – Since we are making the ropes, we need to work fast: divide the batter evenly among three bowls and quickly mix the gel food colorings you want on each one. Yes, it is sticky. When you’re done and before the mixture cools down (work fast!), put it on icing bags with a plain round tip and pipe lines across the whole table dusted with the sugar. Sift some more sugar on top of the lines. Repeat the process with the other colors and leave it to set for one hour.
7 – After the first hour, use a toothpick to attach together the three rope colors and start to gently roll them until you get the twisted effect. Use a toothpick on the other side to keep them in place. Leave it to set for at least 24h.
8 – Cut the marshmallows only after the 24h have passed. Dust the tips with more sugar and enjoy! The scrapes can and should be consumed as well, maybe with a hot cup of coffee. The marshmallows will keep for about a week in a airtight container, in room temperature.

All this sugar that’s left on the table can be sifted back to a container and used as dusting for fondant works. The tips I used for the marshmallows were Wilton 1A and two other plain round tips just about the same size.

Tips:
– Roll the ropes very carefully and gently! Some of them broke when I tried to roll them together, I think I wasn’t as gently as I should’ve.
– The mise en place is essential in this recipe. Make sure everything’s ready for each step!

Which recipes would you guys like to see on video first?